One of the more difficult tasks confronting potential franchisees is navigating and understanding the Franchise Disclosure Document (FDD). The average FDD contains over 200 pages filled with complex sentences, polysyllabic words, and legal boilerplate. It is a document written by lawyers for one purpose: protecting franchisors from future liabilities to franchisees.

According to a 2018 study,  the average sentence contains 25 words. The researchers determined that understanding the document requires the reading equivalent of a master’s degree (20.36 years of study). Consequently, disclosures are “mostly ignored; if noticed, unread; if read, misunderstood; if understood, unused; and if used, often in the wrong way.”

The FDD, while difficult to read and understand, nevertheless provides valuable information that a potential franchisee needs to make a rational decision about investing in the offeror’s franchise. The following is an overview of the FDD with those items considered to be most important by the author identified and explained. Even so, the services of an experienced franchise attorney during the due diligence process are always recommended.

Unscrupulous franchisors and their representatives used emotion, guile, and outright fraud to attract the inexperienced to unproven, get-rich ventures. Due to the growing popularity of franchise ownership and the accompanying abuses, the Federal Trade Commission (FTC) issued its Franchise Rule in 1979, subsequently updated in 2008. The 1979 Rule required franchisors to provide potential franchisees with a Uniform Franchise Offering Circular, renamed in the 2008 legislation as the FDD.

The FTC does not approve nor verify the veracity or completeness of the information contained in the FDD, simply requiring certain disclosures to prospective franchisees. However, some states require that the FDD be registered and approved before sales can occur. Other states, including Florida, do not require registration of the FDD but file it with the state before solicitation begins. 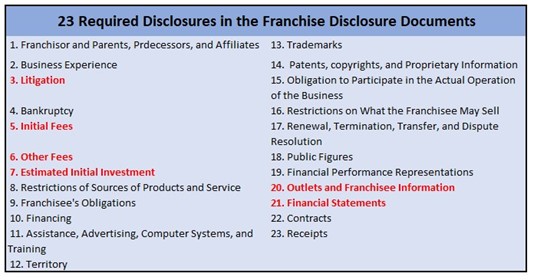 Potential franchisees often complain that reading an FDD is akin to the drudgery of a slog through Finnegan’s Wake by James Joyce or the impossibility of identifying the various Russian characters in The Brothers Karamazov.

The pedantic style of most FDD authors encourages ennui and hides the most critical information in a glut of mundane detail. Even so, potential franchisees should note specific information in the FDD that might matter most in their decision to pursue a franchise agreement. Of the 23 required disclosures above the six in red need careful review.

The purchase of a franchise can be a life-changing event. Franchisees risk thousands, if not millions, of dollars to acquire the experience, expertise, and brand of a successful franchise. Understanding the opportunity and its risks is crucial in making the right decision. Remember that the FDD is not the Franchise Agreement. The latter is the document that will govern the relationship with the franchisor.

Remember, the franchise agreement is a legal contract, so don’t sign it before you have satisfactorily worked out any concerns with your franchisor. And determining any issues you may have with a franchise purchase begins with a thorough review of the FDD with expert assistance.